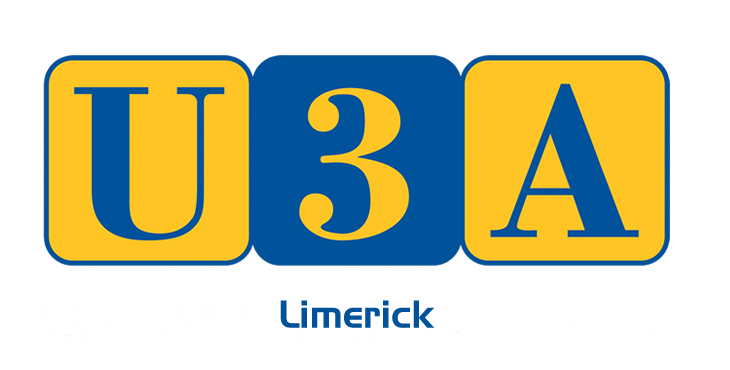 U3A is The University of the Third Age, an international movement of older people which aims to encourage people in their third age to come together and continue their enjoyment of learning in subjects of interest to them. U3A originated in France where it is known as the University of Spare Time. Since its foundation it has spread to most other countries, including Ireland in 1995. Here in Ireland there are now 30 groups meeting regularly, all over the country and varying in size from 10 or 15 members to 600 or more. Age Action Ireland, a charity whose president is Michael D Higgins, was responsible for founding the first U3A group in Ireland and is the umbrella body under which U3A exists. However, each group is independent and organises itself and the way it operates according to the wishes of its members. Some groups are run formally, with an organising committee and Annual General Meetings at which officers are elected. Others prefer to come together informally. Age Action's function with regard to U3A is to support all the groups and facilitate communication between them.

What is the third age?

The third age is defined as a time in your life when you have the leisure to undertake learning for its own sake, the wish to do this while interacting with other like-minded people, and the ability to do so in an informal, relaxed and sociable way.

What is the ethos of U3A?

U3A is non-religious, non-political, and respectful of everyone's right to privacy and individuality. U3A recognises that older people have a significant contribution to make in their community and encourages older people to come together and share their life experiences and knowledge with each other.

What happens in a U3A group?

While each group is independent and locally run according to the wishes of its members, generally speaking U3A groups organise talks, outings and meetings on a wide range of topics such as local history, art appreciation, gardening, social media and technology, health and exercise, music appreciation etc.

Where do groups meet?

Each group makes their own arrangements for their get-togethers, whether they be in the local library, community centre, hotel or any other suitable local venue.

In Limerick we meet on the second Wednesday of the month at 14.30 in the University of Limerick Access Campus, Unit J, LEDP, (Innovation Hub) Roxboro Roundabout, Limerick (opposite Tesco).

Who is eligible to join?

There are no barriers to becoming a member of your local U3A group, no entry requirements or qualifications. The focus is on those who are no longer in full-time employment and who are happy to consider themselves in their third age.

What is the cost of being a U3A member?

As groups are self-governing, self-funding and non-profit organisations, there is usually a small contribution required, but membership should be accessible to people of all income levels.

U3A Limerick has an annual membership fee of €20 per person or €30 for a couple to cover insurance and other costs. Membership is from 1st November to 31st October. We also ask you to contribute €2 towards speakers' costs etc for all live meetings.

Why join a U3A group?

The health benefits, both physical and mental, of being part of a U3A group have been described as life-changing. Having a focus for the day, getting mental stimulation, feeling connected to others, sharing experiences, were some of the benefits reported by people in U3A groups. Being able to stimulate one's memory, broaden one's learning and keep one's brain alive can all be part of the reasons to join a group, as well as the important social aspects of meeting other people, making new friends, and simply having fun.